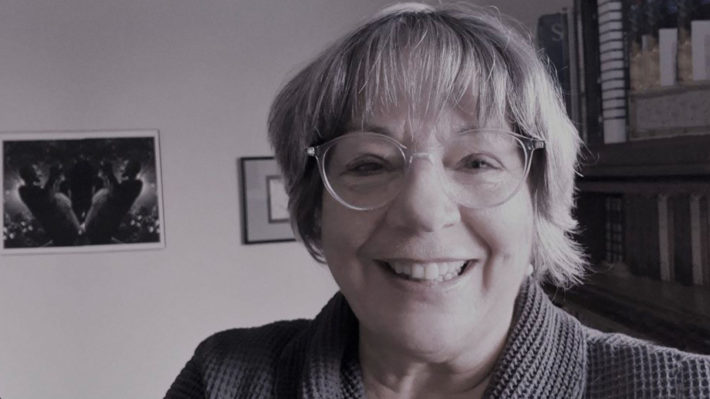 Louise Guillemette-Labory has been interested in comics for a long time. A member of the administrative committee of MCAF for more than 3 years, and former director of the Réseau des bibliothèques de Montréal (Montreal library network), this litterature scholar has recently accepted a proposition from François Mayeux to replace him as the head of the festival. We met her with a few questions.

I’ve read a lot of comics and I’m still a fan. In the 70s, I went to a comics festival at the Université de Montréal where I met my idols: Lauzier, Gotlib, Bretécher, etc., as well as a few up and coming Quebec artists, such as Réal Godbout.

What motivated you to accept the proposition to become president of MCAF?

I accepted to follow in the footsteps of François Mayeux, to whom we owe so much. He did incredible work by creating this festival and supporting comics. At his request, I became a member of the festival.  Now, I will assume the position of president. What I propose today is to provide more structure to the association, all the while maintaining its strong identity, which is what permitted it to grow so fast in the first place.

“Currently, what we need is to adopt structures which will allow us to expand, to be more recognized and to gain notoriety.  Notably, recurring events and activities to promote local comics will help to increase our presence. But the MCAF will remain at the heart of the process.

What difference do you see between the comics you read in the 70s and those of today?

It’s almost as if comics – from Quebec in particular- became mature. It’s now an assertive style that can be addressed to kids and teens, but also to adults. Those who read Tintin in the 70s will read Rabagliati today, but also Zviane along with the catalogue of this beautiful effervescent community. There are a few irreducible Quebecers who shine around the world. The quality of the work that gets done here is absolutely incredible.

You have no idea what you’re missing! There is so much choice for adults. What’s interesting with comics, is that it can be intergenerational. We can have as much pleasure reading a comic for young readers as we can devouring a graphic novel targeting adults. We’ve made giant steps in just a few years.

“From a librarian’s standpoint, we have often stated that the way to get young people interested in reading is through comics. However, it can be very challenging. Yes, there may often be very little text, sometimes even none at all, but there are illustrations. And there’s a certain intelligence between the illustrations and the speech bubbles. Links have to be made, and that’s where we find richness. We can read it two or three times, and we’ll always find something new. We can keep it simple and decide not to ask too many questions, but if we want to delve deeper, we can always find more.

Where will the MCAF be in 4 years?

With more presence and notoriety throughout the year, the MCAF itself will attract many readers. It will develop niches, and start branching out in different directions. For example, a cinema-comic duo or jazz comics – I love jazz. They go so well together! New niches will bring out all the richness and potential of comics and offer us new perspectives.

What are your must-reads?

From Quebec comic artists, there’s Red Ketchup (Réal Godbout, Pierre Fournier), Paul (Michel Rabagliati), Magasin Général (Régis Loisel, Jean-Louis Tripp). My favourites are always going to be Astérix and Tintin… Most of the people in my generation were touched by those. Bretécher, Gotlib, Fred; the entire group in Dargaud are must-reads!

What should we offer those who know very little about comics?

It depends on the person. If we want them to love comics, there has to be a meeting. So we need to know the people. For an independent young woman, Zviane is a must-read, for example. Everything Jean-Paul Eid  (La femme aux cartes postales, Jérôme Bigras) has done deserves to be known. But first, I need to know the person. After that meeting, it can open up and go in all sorts of directions, but it’s the reader themself that needs to do the research. This meeting has to be strong enough that it triggers the desire to go looking for more.