Yves Rodier has been making comics since the tender age of 4! Even though he was born in Farnham, Quebec, is style is a pure product of classic european Bande-Dessinée. After studying film art in college, Rodier made a little splash for himself by finishing “Tintin and Alpha-Art”, the last Tintin story Hergé was working on at the time of his death. Since then, he created three comic series, “Pignouf and Hamlet” (BD Mille-Îles), “The Adventures of Simon Nian” (Éditions Glénat), and “El Spectro” (Éditions du Lombard), his current work. Kind of a cross between James Bond and a Hammer movie, “El Spectro” follows the adventures of a mexican wrestler battling mad scientists and monsters in a Sixties’ world. 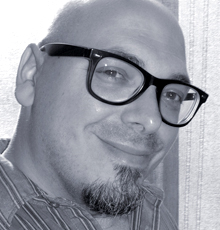