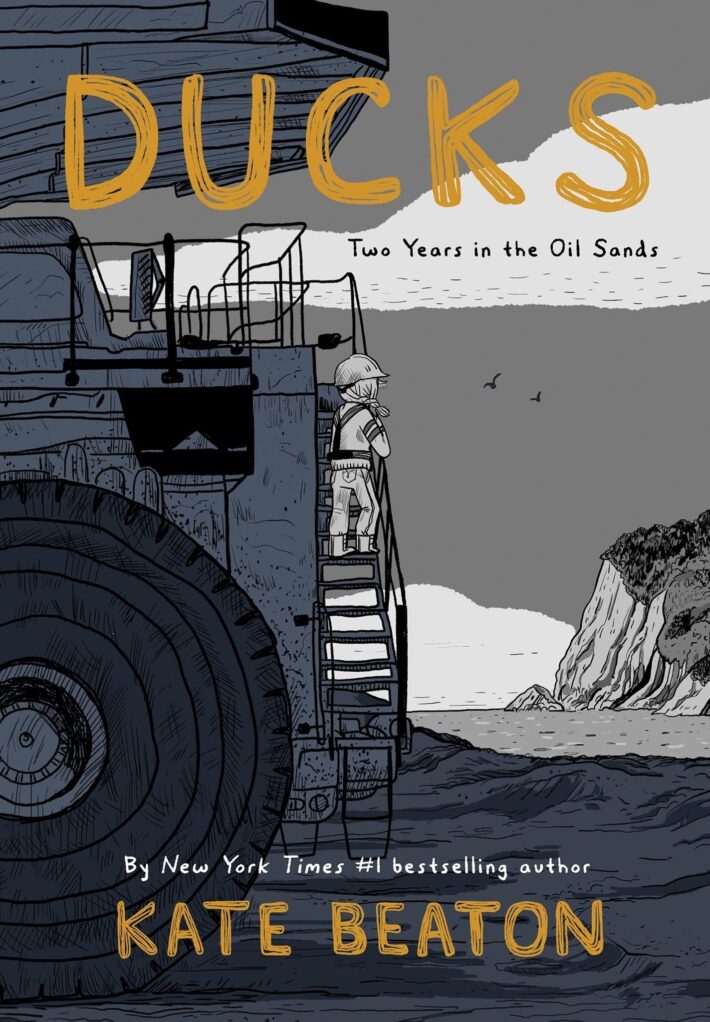 Join our Graphic Novel Book Club as we meet on Tuesday October 25th at 7 PM to discuss Ducks: Two Years in the Oil Sands by Kate Beaton.

Hosted by D+Q Bookseller, Mariana Jimenez and we will be meeting in person at La Petite Librairie Drawn & Quarterly, located at 176 rue Bernard O at 7 pm on Tuesday October 25th. Join us for the discussion!

**PLEASE NOTE** The attendance for this meeting will be limited to 20 book club guests and will be based on a first come, first served basis. All those present will be required to wear a mask for the duration of the meeting.

Where and How Can I purchase the book?
Find the book here: shorturl.at/JLPS4
More info on our webstore here:
mtlshop.drawnandquarterly.com/faq
We Ship Canada-wide!
By purchasing your book at Librairie Drawn & Quarterly you help support events like this one, independent publishing and retailing, our neighborhood, and authors both local and from around the world who depend on independent bookstores for their livelihood. Your support is appreciated.

///////////////////////////////////////////
DUCKS: TWO YEARS IN THE OIL SANDS
Before there was Kate Beaton, New York Times bestselling cartoonist of Hark! A Vagrant, there was Katie Beaton of the Cape Breton Beaton, specifically Mabou, a tight-knit seaside community where the lobster is as abundant as beaches, fiddles, and Gaelic folk songs. With the singular goal of paying off her student loans, Katie heads out west to take advantage of Alberta’s oil rush—part of the long tradition of East Coasters who seek gainful employment elsewhere when they can’t find it in the homeland they love so much. Katie encounters the harsh reality of life in the oil sands, where trauma is an everyday occurrence yet is never discussed.

Beaton’s natural cartooning prowess is on full display as she draws colossal machinery and mammoth vehicles set against a sublime Albertan backdrop of wildlife, northern lights, and boreal forest. Her first full length graphic narrative, Ducks: Two Years in the Oil Sands is an untold story of Canada: a country that prides itself on its egalitarian ethos and natural beauty while simultaneously exploiting both the riches of its land and the humanity of its people.

///////////////////////////////////////////
KATE BEATON was born and raised in Cape Breton, Nova Scotia, Canada. After graduating from Mount Allison University with a double degree in History and Anthropology, she moved to Alberta in search of work that would allow her to pay down her student loans. During the years she spent out West, Beaton began creating webcomics under the name Hark! A Vagrant, quickly drawing a substantial following around the world. The collections of her landmark strip Hark! A Vagrant and Step Aside, Pops each spent several months on the New York Times graphic novel bestseller list, as well as appearing on best of the year lists from Time, The Washington Post, Vulture, NPR Books, and winning the Eisner, Ignatz, Harvey, and Doug Wright Awards. She has also published the picture books King Baby and The Princess and the Pony. Beaton lives in Cape Breton with her family.

///////////////////////////////////////////
Librairie Drawn & Quarterly recognizes that our bookstores are located on the unceded territory of the Kanien’kehá:ka. Many of us refer to Montreal as our home, but it is named Tiohtiá:ke. This has always been a gathering place for many First Nations and continues to be home to a diverse population of Indigenous peoples. It is important to think about how each and every one of us has arrived here. We are grateful that creating and sharing stories has been a part of this land for thousands of years and we urge you to seek out a story that is different from your own.