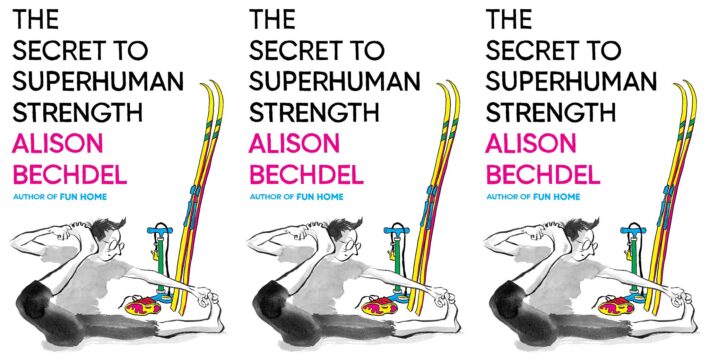 Bestselling cartoonist Alison Bechdel launches her newest graphic memoir, THE SECRET TO SUPERHUMAN STRENGTH, in this exclusive Canadian event presented by Librairie D+Q and The Beguiling.
Alison will guide the audience through a visual presentation, followed by an audience Q+A hosted by fellow cartoonist and friend Sophie Yanow (THE CONTRADICTIONS).

This is a free event organized by independent booksellers Librairie Drawn & Quarterly and The Beguiling. Purchase the book from either store and you will be emailed access to the webinar, co-presented by TCAF, The Toronto Comic Arts Festival. Buy the book from Librairie D+Q: https://bit.ly/329jF7e

Buy the book from The Beguiling: https://bit.ly/325z88e
By purchasing your book from independent retailers you help support events like this one, independent publishing and retailing, our neighborhoods, and authors both local and from around the world who depend on independent bookstores for their livelihood. Your support is appreciated.

///////////////////////////////////////
ALISON BECHDEL
Alison Bechdel's cult following for her early comic strip Dykes to Watch Out For expanded wildly for her family memoirs, the best-selling graphic memoir Fun Home, adapted into a Tony Award-winning musical, and Are You My Mother? Bechdel has been named a MacArthur Fellow and Cartoonist Laureate of Vermont, among many other honors. The Secret to Superman Strength is her latest comic.

///////////////////////////////////////
Librairie Drawn & Quarterly recognizes that our events and bookstores are located on the unceded territory of the Kanien’kehá:ka. Many of us refer to Montreal as our home, but it is named Tiohtiá:ke. This has always been a gathering place for many First Nations and continues to be home to a diverse population of Indigenous peoples. It is important to think about how each and every one of us has arrived here. We are grateful that creating and sharing stories has been a part of this land for thousands of years and we urge you to seek out a story that is different from your own.