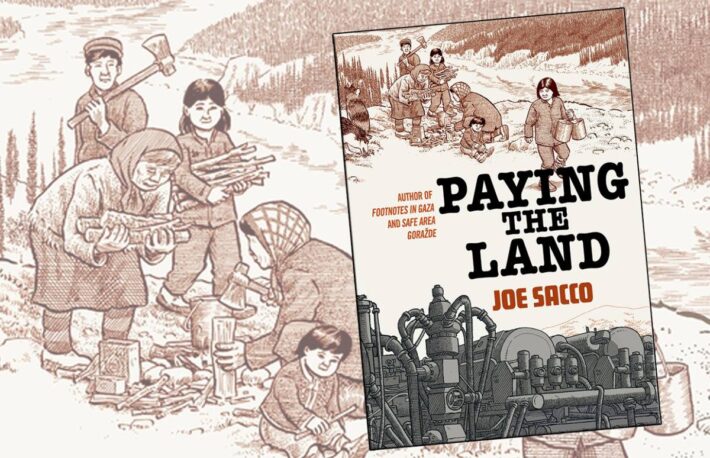 Join our Graphic Novel Book Club as we meet online every month to discuss contemporary Graphic Novels!At our next meeting, Wednesday November 25th, at 7 PM EDT, we'll discuss PAYING THE LAND by Joe Sacco.By purchasing your book from our online store --mtl.drawnandquarterly.com -- you help support community events like this one, independent publishing and retailing, our neighborhood, and authors both local and from around the world who depend on independent bookstores for their livelihood. Your support is appreciated.///////////////////////////////////////////PAYING THE LANDThe Dene have lived in the vast Mackenzie River Valley since time immemorial, by their account. To the Dene, the land owns them, not the other way around, and it is central to their livelihood and very way of being. But the subarctic Canadian Northwest Territories are home to valuable resources, including oil, gas, and diamonds. With mining came jobs and investment, but also road-building, pipelines, and toxic waste, which scarred the landscape, and alcohol, drugs, and debt, which deformed a way of life.In Paying the Land, Joe Sacco travels the frozen North to reveal a people in conflict over the costs and benefits of development. The mining boom is only the latest assault on indigenous culture: Sacco recounts the shattering impact of a residential school system that aimed to “remove the Indian from the child”; the destructive process that drove the Dene from the bush into settlements and turned them into wage laborers; the government land claims stacked against the Dene Nation; and their uphill efforts to revive a wounded culture.Against a vast and gorgeous landscape that dwarfs all human scale, Paying the Land lends an ear to trappers and chiefs, activists and priests, to tell a sweeping story about money, dependency, loss, and culture—recounted in stunning visual detail by one of the greatest cartoonists alive./////////////////////////////////
JOE SACCOJoe Sacco is the author of Footnotes in Gaza, for which he received an Eisner Award and the Ridenhour Book Prize, as well as Palestine, Journalism, Safe Area Goražde (also an Eisner winner), and other books. His works have been translated into fourteen languages and his comics reporting has appeared in Details, The New York Times Magazine, Time, and Harpers. He lives in Portland, Oregon./////////////////////////////////////////Librairie Drawn & Quarterly recognizes that our bookstores are located on the unceded territory of the Kanien’kehá:ka. Many of us refer to Montreal as our home, but it is named Tiohtiá:ke. This has always been a gathering place for many First Nations and continues to be home to a diverse population of Indigenous peoples. It is important to think about how each and every one of us has arrived here. We are grateful that creating and sharing stories has been a part of this land for thousands of years and we urge you to seek out a story that is different from your own./////////////////////////////////////////

Please email events@drawnandquarterly.com if you have any questions