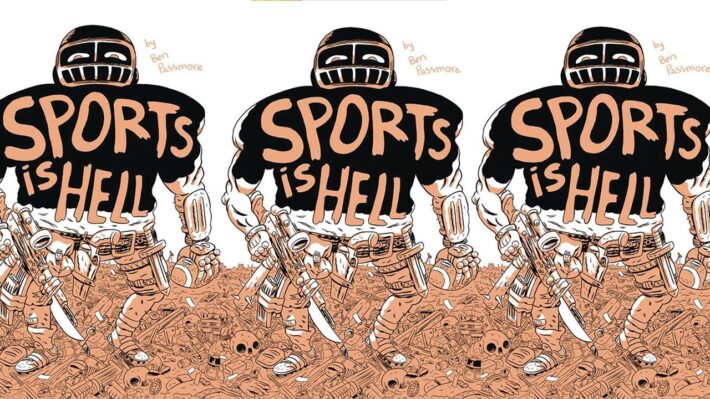 At our next meeting, Tuesday February 23rd, at 8 PM EDT, we'll discuss Sports Is Hell by Ben Passmore.
Where and How Can I purchase the book?
Find the book here: https://bit.ly/3ptxR4X
More info on our webstore here: http://mtl.drawnandquarterly.com/posts/webstore-faq

We Ship Canada-wide! By purchasing your book at Librairie Drawn & Quarterly you help support events like this one, independent publishing and retailing, our neighborhood, and authors both local and from around the world who depend on independent bookstores for their livelihood. Your support is appreciated.

Some wars are for religion and some are for political belief, but this one is for football. After her city wins the Super Bowl for the first time, Tea is separated from her friend during a riot and joins a small clique fighting its way through armed groups of football fanatics to meet a star receiver that just might end the civil war or become the city's new oppressive leader.

BEN PASSMORE is a Philadelphia, PA based cartoonist and illustrator best known for his award-winning comic Your Black Friend (Silver Sprocket), which deftly tackles issues of racism, identity and alienation, and was adapted into a short animated film. His political cartooning appears in The Nib, and he is the cartoonist behind the post-apocalyptic series Daygloahole (Silver Sprocket). He will be partnering with Ezra Claytan Daniels (Upgrade Soul) to bring the body horrific BTTM FDRS (Fantagraphics).